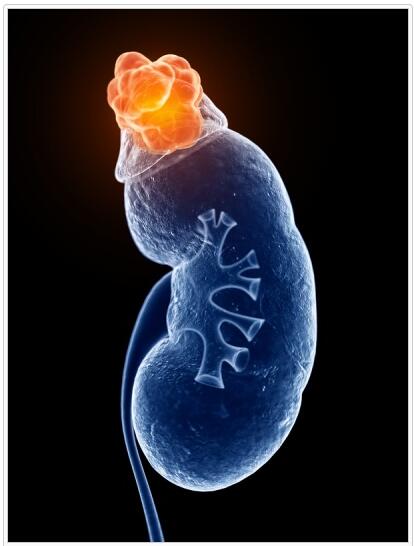 The Achard-Thiers syndrome is a disease that is characterized by the combination of central obesity, hypertrichosis and diabetes. The main cause of the syndrome is an adrenal cortex tumor or a basal pituitary adenoma.

The main cause of the Achard-Thiers syndrome is an adrenal cortex tumor (see illustration) or a basal pituitary adenoma.

Achard-Thiers syndrome is a clinical picture with the core characteristics of trunk obesity , hypertrichosis and diabetes mellitus . The name of the syndrome is derived from Emile Achard and Joseph Thiers.

The two French doctors described the disease for the first time in 1921 and, because of the two most striking features, gave it the designation “diabetes of bearded women”, which is now considered obsolete.

Some pituitary adenomas produce hormones; Depending on the type of hormones they secrete, medicine therefore divides these tumors into different types. The other type of tumor that may cause Achard-Thiers syndrome is the adrenal cortex.

Like the pituitary gland, the adrenal cortex also plays an important role in the hormonal regulation of the organism. Both can therefore cause an imbalance in the composition and concentration of hormones, which among other things results in the growth of beard, which is so noticeable in this syndrome.

A noticeable symptom of Achard-Thiers syndrome is the growth of beard (hirsutism) in the affected women, which is due to an increased concentration of male sex hormones in the female body. These are also known as androgens and include testosterone , androsterone, corticosterone and others , among others .

However, beard growth in women or hirsutism can also be due to other causes and – like the other symptoms – is not a unique selling point of Achard-Thiers syndrome. At the same time, it is possible for the hair to fall out in other parts of the body, for example on the head. In addition, those affected suffer from diabetes mellitus; the disease is popularly known as “diabetes” and is a metabolic disorder that leads to an incorrect regulation of the energy balance in the human body.

Achard-Thiers syndrome is typically associated with obesity (obesity) and arterial hypotension (high blood pressure). In women, the clinical picture can also lead to the absence of menstruation; medicine calls this condition amenorrhea. In some cases, patients with Achard-Thiers syndrome may develop an enlarged clitoris , which can either be present from birth or developed later in life.

Doctors usually diagnose Achard-Thiers syndrome based on clinical presentation because it is characterized by a combination of different symptoms. The growth of the beard (hirsutism) is clearly visible from the outside and does not require any complex diagnostics. A special blood test can usually reveal diabetes mellitus.

Achard-Thiers syndrome is caused by a pituitary adenoma; the most common side effects are diabetes mellitus, obesity, no menstrual bleeding, hair loss and hirsutism. The pituitary adenoma can be treated with medication or surgery. In the event of an operation, there is a general risk of complications, such as the occurrence of thromboses, pulmonary embolisms or wound healing disorders.

If Achard-Thiers syndrome is left untreated, the numerous accompanying symptoms can lead to considerable complications. Those affected by diabetes mellitus, for example, suffer from damage to the eyes or the kidneys, in the worst case there is a risk of a diabetic foot or a diabetic coma. If left untreated, obesity leads to numerous health restrictions: cardiovascular diseases, damage to bones and joints, development of type II diabetes.

The overproduction of male hormones often leads to disorders of fertility (fertility), polycystic ovaries in combination with the absence of the menstrual period prevent pregnancy. For women with hirsutism (increased hair growth) or hair loss, the psychological consequences of Achard-Thiers syndrome are particularly significant, as the appearance of women does not harmonize with the current ideal of beauty.

In general, it can be observed that the psychological effects of an untreated Achard-Thiers syndrome in particular have considerable negative effects. A significant proportion of the women affected suffer from depression or even complete withdrawal from social life.

This special form of type 2 diabetes mellitus always belongs in the hands of a doctor. Since the disease occurs relatively rarely in this form, it should be a specialist. For example, an endocrinologist would be suitable . When a woman develops Achard-Thiers syndrome after the menopause, it is usually a benign tumor.

An endocrinological complex disease like this is not to be trifled with. It is therefore necessary to install close medical supervision in the case of diabetes mellitus plus obesity and hair loss. If there is also high blood pressure and an overproduction of male sex hormones, the suspicion of a tumor of the pituitary gland or the adrenal cortex is obvious. The problem is that the individual symptoms have to be put into context instead of being viewed and treated individually.

Usually, however, the same doctor is rarely told that in addition to the already existing diagnosis of diabetes mellitus, one suddenly suffers from hair loss and increased beard growth. Obesity, on the other hand, is obvious to the doctor. Whether the doctor adds one and one together if the patient develops high blood pressure in addition to the other symptoms is questionable. An overproduction of the progestins is determined in a hormone test. This is arranged by the gynecologist – but only if the latter sees a reason for a hormone test.

The “diabetes mellitus” disease is only one aspect of many, whereby patients can support the drug therapy of diabetes by making changes in their personal lifestyle. Exercise and a balanced, healthy diet are important decision factors from this point of view.

A possible cause of Achard-Thiers syndrome is a basophilic pituitary adenoma. In such a case, surgical removal of the tumor is often an option. Depending on the type of adenoma, various drug treatment options can also be considered, which in turn depend on the individual factors of the individual case.

Additional symptoms and consequences of basophilic pituitary adenoma also call for appropriate treatment. For example, it is possible that the thyroid gland will develop overactive as a result of the tumor if the tumor produces appropriate hormones. Doctors may treat these with other drugs that aim to bring thyroid hormone levels back to normal.

If Achard-Thiers syndrome is based on a tumor in the adrenal cortex, surgical treatment is an option in many cases. During this procedure, doctors remove all of the cancerous tissue from the adrenal cortex if possible, leaving as much healthy tissue untouched as is safe.

Achard-Thiers syndrome leads to very unpleasant complications. Especially women are affected by the syndrome of a strong beard growth. In many cases, this leads to inferiority complexes and reduced self-esteem . Sometimes those affected also become depressed and suffer from other psychological complaints. However, hair can also fall out in other regions of the body or diabetes can develop.

As a result of the disruption of the metabolism, obesity also occurs, which leads to further complaints and to restricted mobility. The heart is also negatively affected by obesity. The blood pressure is increased and the risk of a heart attack increases rapidly.

In most cases, an early diagnosis is possible so that treatment for Achard-Thiers syndrome can be started early. Diabetes can damage the kidneys, eyes and feet. In many cases, the treatment itself does not lead to any further complications and can reduce the symptoms relatively well, so that the disease progresses positively. However, it is not always possible to counteract the masculinities, so that many sufferers experience severe depression.

Measures that patients can take themselves primarily concern the regular and correct intake of medication as well as participation in other forms of treatment and general positive measures for health, such as a balanced diet.

Since the Achard-Thiers syndrome is hereditary, genetic counseling can be useful if you wish to have children in order to avoid passing the syndrome on to the children. In most cases, the disease is treated with medication.

The patient should pay attention to the regular intake of these drugs, whereby interactions with other drugs taken should also be considered. In addition, the patient’s thyroid gland must be monitored regularly in order to avoid malfunction and rule out further complications. Achard-Thiers syndrome can also significantly increase the likelihood of a heart attack.

For this reason, regular heart examinations are also useful, although a healthy lifestyle with a healthy diet can have a very positive effect on the course of the disease. Contact with other sufferers of Achard-Thiers syndrome can also provide valuable information that can help improve their condition.

The symptoms of Achard Thiers Syndrome vary greatly from patient to patient. They also depend on the underlying medical condition. Getting these treated is of paramount importance. While the underlying disease can differ, a negative impairment of the external appearance is usually one thing in common. The female beard is part of the clinical picture.

Still maintaining a positive attitude is important for the sick women. A life-affirming attitude counteracts the threat of social withdrawal and depression . An exchange with other affected persons can also support therapy. Openness in dealing with the disease, active participation in social and family life are cornerstones in self-help. Just as important is the lifelong and disciplined use of the prescribed medication. In addition, psychotherapeutic discussions can also have a positive effect.

As a rule, Achard Thiers patients suffer from diabetes. The effects of diabetes are manageable if the lifestyle is adjusted. A change in diet to a wholesome diet makes sense, as is the integration of sport into everyday life. Since the patients often also suffer from obesity and high blood pressure, regular exercise is particularly beneficial. The visual impairments caused by the disease can be significantly improved through a clever choice of clothes, hair replacement and specially learned make-up techniques.