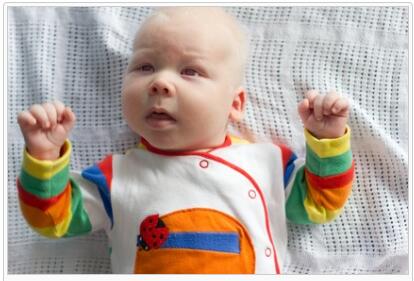 In albinism , a genetic effect results in a deficiency or complete absence of melanin . Among other things, melanin is responsible for the formation of pigments in the skin, eyes and hair. Albinism, which not only occurs in humans, can become an outwardly very noticeable disease. Affected people are often referred to as albinos, but for many patients this represents lead or discrimination.

Oculocutaneous albinism is best known for having light to white hair and light skin.

Albinism is one of the hereditary diseases that can also be passed on from parents with normal pigmentation, as the genetic defect is recessive. It manifests itself in a lack of or only limited production of the pigment melanin.

Albinism is divided into several groups. One main group is ocular albinism, in which only the eyes and thus also the ability to see are affected. The other main group is oculocutaneous albinism, which is best known in public for having light to white hair and light skin.

In both variants, those affected suffer from moderate to severe impairment of their vision. In oculocutaneous albinism, there is an increased risk of skin cancer from exposure to sunlight due to the lack of pigmentation of the skin .

Albinism is caused by the inability of the cells responsible for dye formation to produce melanin. Critical enzymes are missing to get this production going or to operate it to a sufficient extent.

This deficiency is due to a genetic defect, but it has been linked to different genes and chromosomes. All of them have an influence on a crucial process in the formation of melanin. In addition, albinism occurs in connection with other genetic defects, including the now better known Prader-Willi syndrome . In ocular albinism, the cause of the visual problems is also the lack of melanin.

In addition to the color formation of the iris, this is also responsible for the fact that the fundus lacks the necessary melanin, there is noticeable tremor and the optic nerves of people suffering from albinism are not fully developed.

The symptoms and complaints of albinism are usually relatively clear. However, they do not lead to decreased health or other serious conditions, so that most patients do not suffer from a reduced life expectancy. Those affected primarily show pigment disorders in albinism .

The skin can also be completely white or even matt and pale in color. In most cases, the color of the skin does not change even when exposed to sunlight. Albinism often also affects the patient’s hair, so that it appears white, dull or yellowish. There is also ametropia , so that those affected are either nearsighted or farsighted.

Furthermore, albinism does not lead to further complications or symptoms. However, the high sensitivity of the skin to sunlight also increases the risk of skin cancer enormously, so that those affected depend on regular examinations. The extent of albinism can also be very different, so that not all symptoms have to appear together. The illness can also lead to psychological complaints or depression , as the patients are often disregarded because of their appearance or, above all, bullied at school.

In the case of pronounced albinism, the diagnosis is initially a simple visual diagnosis. Even in babies, the light skin is just as noticeable as the colorless hair. Contrary to popular belief, the color of the eyes is not fundamentally red. Mostly there is a light blue. Only in fully developed albinism does the iris lack pigmentation.

During the examination, the pediatrician determines a transparent iris in which the veins can be clearly seen as a reddish shimmer. The diagnosis is confirmed by a genetic test. The lack of pigmentation on the skin requires special care in sunlight from the start. People with albinism have no skin pigment protection and live with an increased risk of skin cancer.

Albinism can be more or less pronounced. For some, only the pigmentation of the eye is affected, which is referred to as ocular albinism. The color of the skin and hair is normal. However, the lack of pigmentation in the eyes leads to a wide variety of eye problems, such as strabismus or sensitivity to light.

In extreme cases, the entire melanin production is defective, as a result of which those affected have white hair, extremely pale skin and unusually light eyes that are very sensitive to light. In technical jargon, this is referred to as oculocutaneous albinism (OCA), i.e. albinism that affects both the eyes and the skin. Depending on the severity, a distinction is made between different subtypes – from OCA 1 a / b to OCA 4.

In very rare cases, those affected not only suffer from a lack of pigmentation, but also from a higher risk of infection, neurological problems or lung, bowel and bleeding disorders. However, these cases are extremely rare. Those affected can find detailed information on the subject of albinism on the website of the non-profit online self-help group “NOAH”.

Albinism is diagnosed at birth and should be promptly examined by a doctor. During the initial examination of an affected newborn baby, the doctor will pay particular attention to the development of physical functions that may be impaired by albinism. Of course, it is also possible that a child with albinism will only later find out that they have physical problems.

It is important that the parents of such a child inform themselves about the symptoms by which they would recognize that their child should be examined by a doctor. For example, if you have problems with your eyesight, this is normal for albinism, but it should be treated immediately. Many people live with albinism without major problems or congenital and acquired disorders, but face different risks and challenges. This particularly applies to the skin’s sensitivity to light.

If people with albinism notice any visible changes in their skin such as redness, pain, or raised areas, they should see a dermatologist sooner rather than later . Due to its high susceptibility to damage from UV radiation, albinism brings with it an increased risk of skin cancer.

In the case of forms of albinism that cause considerable problems, including physical and mental disabilities, regular medical appointments must be made. These are used to monitor the health of the person affected and to identify further problems in good time. In the case of severe disabilities, accommodation in the home with trained nurses can make sense.

A cure for albinism is not possible. However, the defect is not life-shortening. Due to the increased risk of skin cancer, a comprehensive examination for abnormal skin conditions should be carried out on a regular basis.

The impaired vision is more stressful for those affected by albinism. They only have poor eyesight, which in severe cases can be as low as 10 percent. Visual aids are indispensable and make everyday life easier. Most people with albinism cannot or are not allowed to drive because they cannot safely see even larger objects.

In addition to the physical aids, psychological support is recommended in some cases if the person concerned suffers from his or her unusual appearance. In some cultures, especially on the African continent, the appearance of albinism is associated with social exclusion. Traditionally, in many regions there, people suffering from albinism are considered a bad omen or cursed.

This devaluation has not been able to develop to this extent in western cultures, since among the fair-skinned western Europeans people with albinism are seldom noticed in this degree.

This mainly leads to farsightedness or nearsightedness . These complaints can, however, be compensated for by wearing glasses or contact lenses . As a rule, albinism also leads to an increased risk of various infections and inflammations .

Treatment of albinism is not possible. However, those affected often need psychological support. Life expectancy in patients with albinism is not reduced and their everyday life is at least not restricted due to the disease itself. Furthermore, there are no particular complaints or complications. However, albinism can also increase the patient’s risk of skin cancer.

It is not possible to prevent albinism as a typical hereditary disease. Except for the visual impairment , the occurrence of this genetic defect is not associated with severe restrictions for those affected. Those affected must, however, observe the protective measures against sunlight in order to avoid cancer in a disciplined manner, so that albinism cannot show any health-threatening effects.

Follow-up care should, among other things, ensure that an illness does not recur. However, since albinism cannot be cured, this cannot be the aim of medical monitoring. Rather, it is about preventing complications and supporting patients in their everyday lives. Those affected contact a doctor in the event of acute complaints.

Regular examination is rare. Those affected receive extensive information about the effects of the disease upon initial diagnosis. Albinism does not reduce the lifespan. The preventive measures include, above all, skin protection. The largest human body organ is exposed to UV rays almost unprotected.

Patients must avoid direct sunlight. The strong midday heat brings the greatest risk. Sun creams with a high sun protection factor should be used. Occasionally sufferers of the defect also suffer from poor eyesight. A pair of glasses can help. The white and pale skin is characteristic. It sometimes requires psychological follow-up.

Children and young people in particular regularly find being different to be stressful. They are not infrequently exposed to the gossip of their peers. Sometimes those affected complain of disadvantages in the workplace. A doctor can order psychotherapy. This can prevent depression and anxiety disorders.

Albinism is a disease that cannot be cured because it is due to a genetic defect, it is a hereditary disease. Therefore, the person affected has to live with albinism and adjust their everyday life to their special needs.

Sunbathing should be strictly avoided, as the lack of melanin in the skin and sometimes in the iris of the eyes can quickly burn the skin. In general, the hours of sunshine should be avoided, especially in summer.

When leaving the house, the person concerned must ensure that they wear a hat and clothing that can protect them from the harmful UV rays of the sun. The eyes of patients with albinism are particularly sensitive to the sun if they are affected by the hereditary disease. Wearing sunglasses is therefore essential.

Albinism varies in severity, so the patient must address his or her special needs and discuss them with a doctor. The eyesight of patients with albinism is often severely restricted, so visual aids, such as glasses , must be available. In addition, patients are often not allowed to drive due to their poor eyesight. You are therefore dependent on public transport or friends and family to do everyday things.