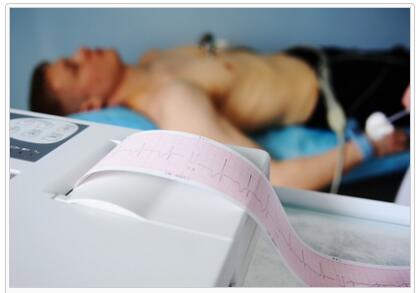 What is AV Nodal Reentry Tachycardia?

Basically, AV node reentry tachycardia is a benign disease of the heart rhythm. The heartbeat becomes significantly faster for a limited period of time, but remains regular.

Basically, AV node reentry tachycardia is a benign disease of the heart rhythm . The heartbeat becomes significantly faster for a limited period of time, but remains regular. After the heartbeat accelerates like a seizure, the pulse rate returns to normal.

AV nodal reentry tachycardia is the most common type from the group of so-called PSTV diseases. In principle, the disease is inherited or exists in the affected person from birth. In the context of AV node reentry tachycardia, there are two pathways of the AV nodes. One of the lanes is faster, the other slower.

The causes of the development of AV nodal reentry tachycardia have not yet been fully explored. However, there are numerous assumptions about the genesis of the disease, some of which are already considered proven. The discussion is, for example, that the disease is caused by a supraventricular extrasystole or that this factor plays a decisive role in the disease.

In addition, there are two conduction paths that work separately from one another in terms of their function. There is a slow and a fast transmission of excitations. These are mainly related to the transmission of stimuli between the ventricles and the atria of the heart.

Due to the different speeds of the transmission, some medical professionals assume that a so-called circular excitation occurs in the context of AV node reentry tachycardia, which may last for several hours. This circling excitation line is also known as reentry, from which the term disease is derived.

The typical symptoms of AV nodal reentry tachycardia are relatively clear indicators of the disease. The sick person suffer from an unexpected rapid heartbeat , which extends over a period of a few minutes up to several hours. The heart beat occurs in the form of a seizure.

After all, the time interval marked by the racing heart ends as suddenly as it began. Now the patients have a normal sinus rhythm again. For example, people develop palpitations during AV nodal reentry tachycardia . In addition, numerous patients complain of symptoms such as nausea , anxiety and flushing .

This phenomenon is a dreaded complication in the context of AV nodal reentry tachycardia. In connection with it, patients often suffer from symptoms such as low blood pressure , dizziness , angina pectoris and syncope . In the worst case, cardiogenic shock occurs .

The diagnosis of AV nodal reentry tachycardia includes various examinations of the affected patient. In the first step of the diagnosis, a carefully carried out anamnesis plays the most important role. The patient is asked about his symptoms, the circumstances of the seizure-like heart rate and previous illnesses.

In the second step of diagnosing AV nodal reentry tachycardia, clinical examination procedures are used. Carrying out an EKG is of particular relevance here . The abnormalities show up in the normal sinus rhythm. If there is an attack with a racing heart, the pulse rate is sometimes between 150 to 220 beats per minute.

In addition, a thorough differential diagnosis must be carried out, whereby other heart diseases are the main focus and must be ruled out. For example, it is particularly important to distinguish between AV node reentry tachycardia and ventricular tachycardia. This differentiation can be difficult under certain circumstances. The presence of sinus tachycardia must also be clarified.

If left untreated, AV node reentry tachycardia (AVNRT) can also be associated with various complications during and after therapy. If the heart is already damaged, for example heart failure or coronary artery disease, AVNRT can lead to a decrease in cardiac output.

This value describes how much blood the heart can pump into the body’s circulation per unit of time. As a result, blood pressure drops and chest pain and dizziness occur, as well as syncope (fainting) are possible. In addition, many sufferers report a strong urge to urinate, which is caused by the release of the hormone ANP. However, this is harmless in itself.

If the AVNRT is not recognized and persists over a longer period of time, structural changes take place in the heart. As the disease progresses, cardiomyopathy develops, which affects the normal function of the heart. AVNRT is primarily not life-threatening, but further complications can arise during and after treatment.

A vasovagal maneuver can cause fainting and consequential injuries, while drug therapy always carries the risk of unwanted drug effects and allergic reactions. As with any cardiac catheter examination, the decision to catheter ablation can lead to problems. These include thrombosis, vascular injuries or perforation of the myocardium.

Basically, it is a benign cardiac arrhythmia, which is usually based on a congenital anomaly in the conduction of excitation from the AV node to the ventricles. As a rule, two conduction pathways are formed in those affected, which transmit the contraction stimulus of the sinus node to the chambers at different speeds. However, many people who have the particular congenital conduction abnormality do not develop AVNRT. Normally, you do not need to see a doctor immediately if your heart palpitations occur spontaneously.

An acute attack often reacts to simple countermeasures and ends spontaneously. For example, you can drink ice cold water or use the Valsalva method. Breathing and abdominal muscles are tensed and the breath is held, so that a compressive pressure is created, which in many cases leads to an end to the tachycardia.

Another option is to press one of the two carotid arteries at the level of the larynx to stimulate the baroreceptors that are inside. In complicated cases, the problems should be clarified by a cardiologist in order to start drug treatment or even to correct the causes of the disease via catheter ablation.

AV node reentry tachycardia is primarily treated symptomatically, as causal therapy is not possible in the majority of cases. If they have a heartbeat attack, people may find it helpful to drink cold water or cool their faces. In addition, a carotid sinus massage and vagus irritation provide partial relief from the acute symptoms.

There is also the option of drug treatment. For example, the active ingredients adenosine, ajmaline and verapamil come into consideration. In addition, some patients with AV nodal reentry tachycardia may receive electrotherapy in some cases .

This is mainly used when drugs are not sufficiently effective. In addition, electrotherapy is often the first choice for people with unstable circulation, as otherwise the risk of cardiogenic shock is relatively high. Interval treatment is also possible.

The AV nodal reentry tachycardia primarily causes heart problems. In most cases, the patient’s heart rate increases. It is not uncommon for a suddenly increased pulse to lead to anxiety or a panic attack . The racing heart can also occur in stressful situations and severely limit the patient’s everyday life. It is also no longer possible to carry out normal activities or sporting activities.

There is nausea and often vomiting . The affected person suffers from dizziness and in the worst case can also suffer a shock from the AV nodal reentry tachycardia. It is not uncommon for the disease to lead to psychological limitations, so that patients withdraw socially and avoid certain situations more and more often.

If left untreated, the disease can also lead to death. Since there is no causal treatment, it is always carried out symptomatically. The patient must rest and drink water in the event of an acute attack. The symptoms usually go away after a short time and there are no further symptoms.

Prevention of AV nodal reentry tachycardia is difficult because the triggering factors can hardly be influenced. Therefore, complaints must be clarified and treated immediately by a doctor.

In general, patients with AV nodal reentry tachycardia do not have any special follow-up options. The disease must be treated by a doctor if it limits or makes life difficult for the person affected. The treatment can also take place through means of self-help.

If the symptoms of AV nodal reentry tachycardia occur, the person concerned must calm down and drink cold water. The face or, if possible, the whole body can also be cooled down. This can alleviate the symptoms in most cases.

Treatment of AV node reentry tachycardia with the help of medication is also possible. The patient should pay attention to possible interactions and take the medication regularly. In the event of a shock, however, an emergency doctor must be called immediately or the hospital visited.

A healthy lifestyle with a healthy diet generally has a very positive effect on the course of AV node reentry tachycardia. The sufferer should also avoid smoking. Avoid unnecessary strenuous activities that could stress the heart. It is not uncommon for people to be in contact with other people with AV nodal reentry tachycardia, as this leads to an exchange of information.

A spontaneous occurrence of AV node reentry tachycardia, for which a heart rate of 140 to 220 Hertz is typical, usually lasts a few seconds to several hours before the seizure-like palpitations stop as suddenly as it started.

There are several everyday and self-help options that, if successful, lead to the high heart rate returning to normal. The simplest measure is to drink a glass of ice-cold water as soon as possible and dip your face in cold water. The so-called Valsalva method can also actively end the racing heart in many cases. After inhaling deeply and holding your breath , the breathing and abdominal muscles are tensed and pressure is built up in the abdomen against exhalation.

If the Valsalva method does not work either, a short pressure massage on one of the two carotid arteries at the level of the larynx is up for debate. However, this should only be done while sitting or lying down and never on both carotid arteries at the same time, because this can lead to a short-term drop in blood pressure, which can be accompanied by dizziness or, in extreme cases, even by a brief fainting . In the carotid arteries there are baroreceptors (pressure sensors) that can be stimulated by pressure massage . The reentry tachycardia can often be actively ended by the stimulation.